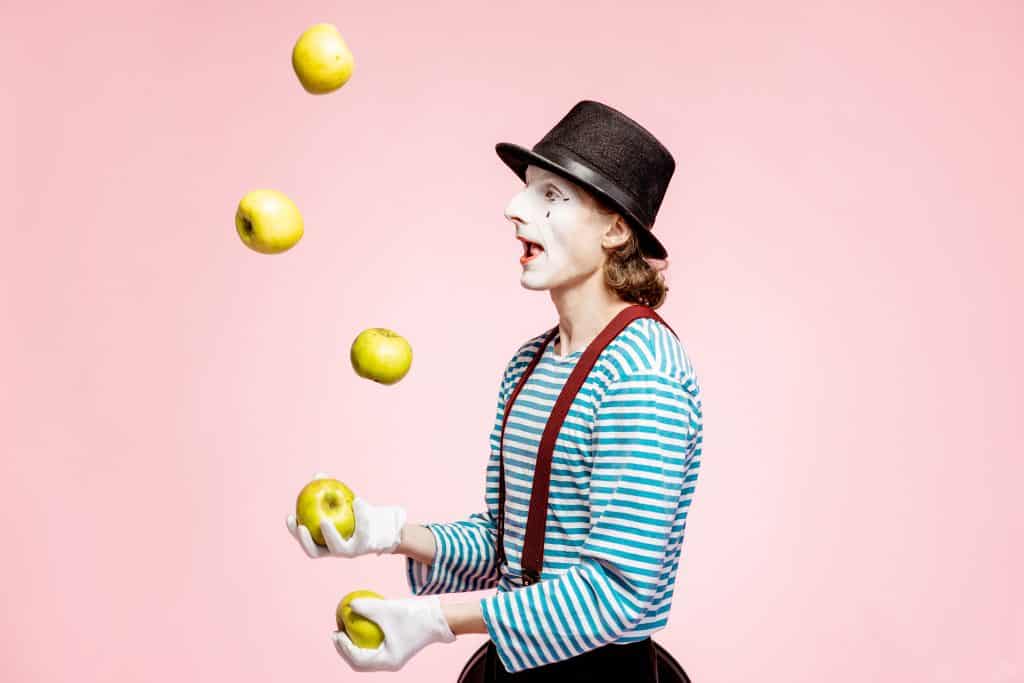 One of the main feelings I’m getting myself and from others at the moment is the demands of so many different things on us. Work – worrying about the people we serve or colleagues, or whether we even have a job to go back to. Home and keeping things in order in some way – cooking, cleaning, decluttering, doing the garden etc. Children – schooling, keeping them busy, managing their anxieties and if older the worry of where they might be or what they might be doing when they go on their daily walks! Parents or elderly relatives or friends – not able to see them or help in the ways we want to…….and on and on. So many things – it feels like we’re juggling and not just three balls but many.

This thought led me to have a little look at juggling. Not something I’ve paid much attention to before but it’s certainly a very familiar feeling of getting one thing sorted (up in the air) and another drops. So, what might we be able to learn from juggling that could help us right now?

Juggling is described as the sport of tossing and catching or manipulating objects, keeping them in constant motion. It was reported as early as 1781 BC in Egypt and came to the first circus in 1768.

I love that it talks about keeping them in motion as that’s the problem with life too at the moment isn’t it?  My daughter who is 19 and helping me round the house – I asked her yesterday “how come you’ve not done so much recently without being asked?” her reply was “it just gets messy again and I have to do it all over again!”. I know that feeling well and it feels more like a constant keeping in motion being at home all the time. Monotonous, disheartening and relentless amounts of washing, meals to be cooked and rooms to be cleaned.

Juggling also is said to help players improve their agility especially if they work in pairs or challenge their individual skills by knocking the ball out of their proximity and keeping it under control.

Agility is something I’ve never really possessed at least not physically. I would like to think that mentally and emotionally I’ve been able to adapt and change to my circumstances over the years. Our current situation is a new one for us all though and demands more agility than usual. How do we become more agile? Some of you are having to learn how to teach your children at home, or at least how to motivate them to learn. This has demanded a different skill from you and a lot of patience I’m sure. For me it’s been more about keeping my mind active with reading and watching, listening to others and trying to influence my teenagers to do that too.

Keeping things under control would be great eh? Some of the comments from our community recently has been around the difficulties in getting our children to do school-work or ‘influencing’ them to have a shower or even get out of bed occasionally. I get that. It’s hard enough some mornings for me to get myself out of bed and in constant motion so I can only imagine how my teenagers’ bodies feel.

Another reason why apparently it is so hard to learn to juggle is because most of us need to UNLEARN some things before we can progress. This is especially true for people who play a sport where they throw a ball to another person or at an object. … The more ambidextrous that you are, the easier you will pick up juggling.

I don’t know about you but being out in the world right now is weird. I’m having to unlearn how to walk around a shop and not get close to people, or see a friend in distress and not hug them. Hard work. What our world will look like in a few months’ time we just don’t know but again I’m sure we will have to learn new ways of doing things.

Unlearn before we can progress.

Juggling is a challenging but rewarding hobby; studies show that people who learn to juggle increase their brains’ grey matter! While juggling may seem and be difficult to master at first, it becomes easier once you’ve learned the basics and practiced it.

Finally, this is what I’ve noticed in lockdown and juggling – we need the basics first. We need to learn how to throw a few balls and focus – then practice. I know it can feel very overwhelming when there’s so much to juggle but breathe, take your time and focus on what’s in front of you. What is important right now?

Talk about juggling the worries and giving yourself focus – take a look at this video by the Holderness Family – very funny but also quite true (for me anyway). 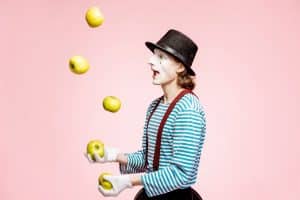 One of the main feelings I’m getting myself and from others at the moment is the demands of so many different things on us. Work 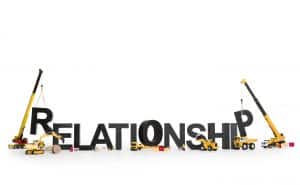 There’s so much written about relationships as they are so important. We are born through relationship, every day of our lives is touched by relationships